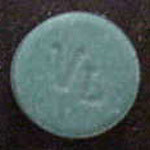 Note
This tablet was originally tested by GC/MS which identified only Caffeine as an active ingredient. Because these results were inconsistent with the results of the Marquis and Mecke reagent tests (which showed the presence of an MDMA-like substance), we had the tablet re-tested.

The Marquis and Mecke tests showed the same results on the second test. A Thin Layer Chromatography (TLC) also showed only Caffeine. But when a more concentrated GC/MS was run, looking for the presence of small amounts of other substances, MDA appeared.

The explanation for why this didn't show up in the first testing results is that, because the MDA is only present at 1/30th the quantities of the Caffeine, the MDA peak on the GC/MS results was so small as to be indistinguishable from background noise (Relative peak sizes show relative quantities of substances).

Given that the tablet weighs 300 mg total, allowing for some binders, and taking the word of the lab that there was 'a lot of caffeine in these tablets'...we can make a very very rough guess that the quantities of chemicals found in this tablet are something like 5-8 mg of MDA and 150-250 mg of caffeine. Again, these numbers are guesses.

We know that there have been reports of strong reactions to tablets bearing this imprint, including long duration, vomiting, muscle spasms, and hallucinations. Some of these are easily attributable to a large dose of caffeine. But as always, it is possible that other tablets with this same imprint contain something else.


Send in a sample for testing

© Copyright 2001 - 2023 Erowid Center. All rights reserved. By using this site you agree not to publish results or analysis of our data without written permission from Erowid Center.
Permission required before reproducing or using in other software or system. DrugsData is a project of Erowid Center.
Test Results · Test Result Statistics · About Tests & Data · About Us · Contact Us · Support DrugsData · Send in a Sample for Testing