About Tests and Data

All test result information provided on DrugsData.org has been lab tested.

About the data presented on our site

Please read the introduction to the GC/MS on the Test Types page. The GC/MS is an expensive set of instruments which are used to determine the contents of the pills analyzed by Erowid's DrugsData project. Our project is disallowed by the US DEA from publishing quantities of constituents, only the relative amounts of detected substancesare published. Some substances are not detected by our analytical process because their molecular masses do not fall within the operating range of tests performed or the molecules disintegrate inside the test apparatus. However most psychoactive drugs known between 1850 and 2019 will be detected.

The Mass Spectrometer used by our primary lab is the Hewlett-Packard 5973 MSD, now sold as the Agilent 5973. See Agilent's GC/MS Systems and Agilent 5973.

How are the ratios measured? #

The ratio numbers which are displayed with most of the results from DDL (Drug Detection Laboratories) are determined by simply estimating the heights and sizes of each peak on the GC/MS output chart. Take a look at the the example GC (Gas Chromatograph) portion of an analysis. The graph has 'Abundance' along the Y axis and Time along the X-axis. The Time measures how long each specific chemical takes to travel through the long GC coil. 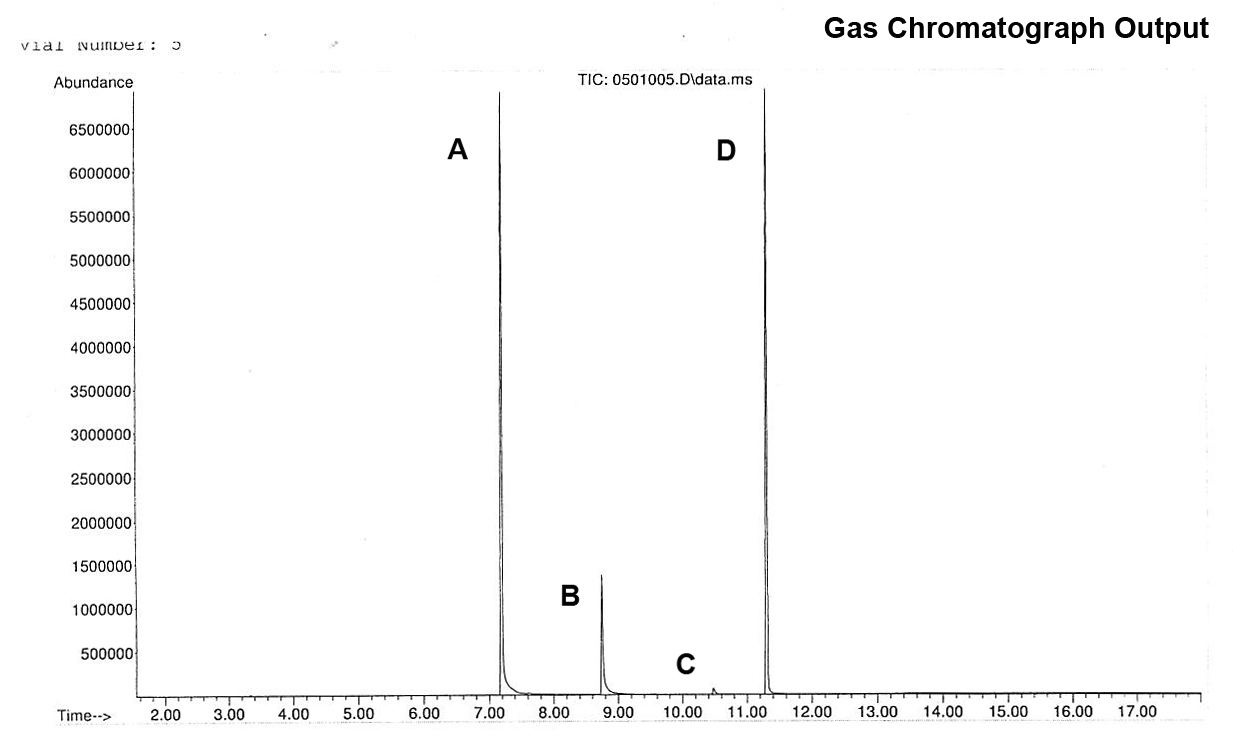 This example shows three major peaks marked "A", "B", and "D" as well as a tiny peak to the right of "C". Peak A and D are very nearly the same height and volume, meaning that the relative mass of the chemicals appearing at those peaks is nearly identical based on the both the peak height and the area under the curve (AUC). Peak B is around one quarter (.25) the height of peaks A and D. Peak C (near 10.5 minutes) is so small that the lab would record this as a "trace" amount.

The lab computes the ratios by comparing the heights and size of the peaks. For this example, the lab would report:

Reading a GC/MS chart can be complicated, and requires experience and knowledge of how the chemicals react inside the specific equipment used. Many chemicals break apart inside the system and what appear to be individual peaks may be one substance broken into multiple sub-components.

It's extremely important to note that the relative ratios cannot be used to determine the quantitative contents of any of the substances found in the tests. It is also important to remember that each chemical has a different active dosage range. If a test determines that a tablet contains equal amounts of MDMA and methamphetamine, that would mean that the primary psychoactive effects of the tablet would likely be from the methamphetamine since it is much more potent than MDMA.

Why don't you display percentages instead of ratios?

It can be misleading to display the substance results as percentages because not every component of a tablet is included in the GC/MS results (fillers, binders, etc) and the ratios of the identified compounds are only rough estimates. We have chosen, at this point, to use the more arcane ratio notation so that new visitors will not mistakenly assume that the amounts shown can be used to determine the amount of a substance in the displayed data.

A wide range of substances cannot be detected using the GC/MS testing done by DDL. When we surveyed non-experts as to what they thought "50% MDMA, 50% caffeine" would mean, they often made the mistake of assuming that it MDMA and Caffeine each made up 50% of the weight of the tablet or that there was some way of extrapolating from the percentage to a quantitative value of the amount of MDMA or caffeine in the pill. A 1 to 1 ratio could be represented validly as 50% to 50%. There is no way of knowing (from the data we receive from the lab) whether there is 1mg of each substance in the tablet or 100mg of each substance in the tablet. While the ratio notation is confusing and may baffle some visitors, we hope it will lead to less mistaken assumptions about the pill contents.

In short, the DEA does not allow us to do so. In the United States, the handling of Schedule I substances (MDMA, LSD, Cannabis, etc) is restricted to those with a valid DEA license. Forensic labs such as DDL and others require DEA licensure in order to operate. The DEA has made an unpublished administrative rule that licensed labs are not allowed to provide quantitative data to the public, reportedly for fear of providing 'quality control' to dealers and suppliers of black market products. The DEA and other government organizations around the US perform thousands of tests of street pills each year, yet only a tiny amount of info about a small number of tests are published, except as aggregate data that cannot be verified.

Because of this, the information we receive from the laboratory testing only includes information about what known substances were found and in what ratios.

Donate now
© Copyright 2001 - 2020 Erowid Center. All rights reserved. By using this site you agree not to publish results or analysis of our data without written permission from Erowid Center.
Permission required before reproducing or using in other software or system. DrugsData is a project of Erowid Center.
Test Results · Test Result Statistics · About Tests & Data · About Us · Contact Us · Support DrugsData · Send in a Sample for Testing