Example Output from a Gas Chromatograph

The Gas Chromatography (GC) process separates a substance into its various component parts by driving it down a long thin tube. Each chemical component exits the GC at a slightly different time and is then sent to the Mass Spectrometer which bombards the components with a beam of electrons in order to give the molecules a charge. The molecules of a given chemical component break apart into fragment ions which are then sent into a powerful magnetic field where fragments of various weights separate from each other. The separated fragments can then be charted and the chart compared to a database of previously verified molecules for identification (see below for sample chart). The GC/MS process is quite accurate and requires large and expensive equipment. 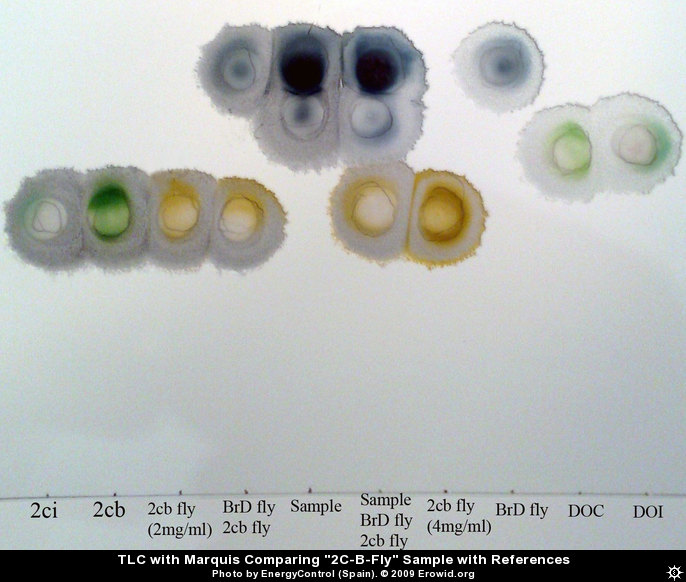 TLC is a qualitative analysis method that involves using small specially prepared "plates" (usually plastic or glass), that are coated on one side with a very thin layer of sorbent (such as solid silica gel). The sample to be analyzed is dissolved in a solvent or solvent blend, a small spot is placed near the lower edge of the plate, and the bottom of the plate is set in unadulterated solvent. Chemicals are wicked up the plate via capillary action causing spots of chemicals to creep slowly upward. Different chemicals move at different rates. If a sample contains multiple chemicals, it will separate into multiple spots as it moves. After putting a microliter of a known reference standard (of say MDMA), next to a microliter of a sample (scraped from a tablet), the plate is checked in around 20-90 minutes to compare the two spots by color, size, and distance traveled. If the sample matches the reference standard, the sample has likely been identified. In some cases a developing reagent, UV light, and/or heating of the plate is required to make the spot(s) visible.

In order to identify chemicals using thin layer chromotography a pure reference standard must be available for each chemical, though the amount of the reference chemical used for each test is tiny. To analyze an unknown sample, only about three micrograms of a chemical needs to be present.

TLC results are not as definitive as GC/MS, but results from TLC can be double-checked via GC/MS. TLC preformed by experienced technicians provides a low-cost, robust alternative to more costly and time-consuming analysis, yielding data that is useful for risk reduction efforts such as on-site drug checking.

The Marquis test is a reagent field test conducted by placing a drop of reagent liquid onto a small sample of the material being tested. The chemicals in the reagent react differently with different chemicals, turning a variety of colors based on the what is in the material being tested. A typical reation to MDMA is dark purple / black. A bright orange reaction can indicate the presence of amphetamine or methamphetamine (speed). A bright yellow / green reaction can indicate the presence of 2C-B, DOM, or DOB. This test is relatively limited in what it can test for, but is a simple and inexpensive means of narrowing down the possible components of a pill or material.

As with the Marquis test, the Macke test is a reagent field test conducted by placing a drop of liquid reagent onto a sample of the material in question. Mecke reagent is primarily used for the identification of heroin and other opiates. Heroin turns green and then blue-green when treated with Mecke's reagent.

The Mandelin reagent is another field reagent. The reason EcstasyData added Mandelin to its testing in 2013 is because DanceSafe began offering it for sale for the purpose of trying to identify PMA, PMMA, and other dangerous contaminants in the ecstasy market. It is quite yellow in color and that yellow complicates describing the color reaction. You can see the "blank" (no drugs) colors of the reagents here.

DDL conducted a series of tests using the field reagents against some non-organic chemicals that would not show up as substances via GC/MS.

Donate now
© Copyright 2001 - 2023 Erowid Center. All rights reserved. By using this site you agree not to publish results or analysis of our data without written permission from Erowid Center.
Permission required before reproducing or using in other software or system. DrugsData is a project of Erowid Center.
Test Results · Test Result Statistics · About Tests & Data · About Us · Contact Us · Support DrugsData · Send in a Sample for Testing