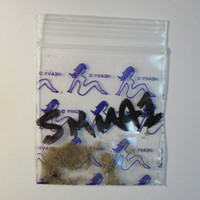 Sold as: 5-Methyl-MDA
Expected to be: 5-Methyl-MDA
Note
After results for this sample were first published, the submitter contacted EcstasyData (see Description below) and asked to have it re-tested for an NBOMe or other high-potency psychedelic. The first pass analysis detected bk-MDMA with a small amount of 4-FA only.

The sample, which appeared to the naked eye to be fairly even and slightly damp or sticky, was initially misidentified because the lab did not notice that the material was not homogenous.

Under later examination with a magnifying glass, there were clearly different types and colors of crystals and powders mashed together that were not thoroughly mixed.

When the lab scooped a small amount of the material and homogenized it to complete the first pass analysis, they found two drugs. After preparing the sample for a second analysis, six drugs were found.
Description
Material described as 'not a street drug', acquired from a lab outside the United States.

Your analysis says my sample is mostly bk-mdma with a small amount of 4-fa. I believe there is another chemical in the sample that was not detected. The trip reports for this specific substance [do] not match up at to methylone or 4-fa…

30-60mg nasal gave a MDA feeling with a psychedelic edge that felt a lot like lsd and lasted for 8-12 hours.

200mg nasal produced DMT like visuals, subject was thrown into dream states and was traveling through other worlds in her mind for 6 hours then was still high for 24 hours after the intense come-up.

It only works nasally and everyone has psychedelic responses and no one has been mixing any other substance while testing this chemical.

So maybe something was overlooked? Could there be trace amounts of something like 25b-nbome or any other nbome that would give us these psychedelic effects? methylone and 4fa do not have this effect at all.

© Copyright 2001 - 2019 Erowid Center. All rights reserved. Using this site you agree not to reproduce results or publish analysis of our data without written permission.
Permission required before publicly reproducing. DrugsData is a project of Erowid Center.
Test Results · Test Result Statistics · About Tests & Data · About Us · Contact Us · Support DrugsData · Send in a Sample for Testing